Before last Thursday’s end of tour spectacular from Plague Vendor and Love Buzzard I’d never been to the Old Blue Last. The pub at street level was loud and brash and rammed, with a DJ pumping out the Michael Jackson classics guaranteed to get those care-free enough to be celebrating the fact that there was only one working day left before the weekend gyrating and jumping around. The music was loud enough and the speakers knackered enough to make every conversation a shouting match and ordering at the bar “complicated”, but there was decent beer on tap, and it was filled with people who were at the very least making sure they were being seen making it look like they’re having a good time…

It’s also a place that conceals a somewhat infamous venue. A winding, narrow set of stairs in the corner of the bar leads up to the venue where several nights a week the up and coming bands of London and beyond come to strut their stuff. The place is stripped right down, there’s no furniture save the wonderfully tasseled standard lamp lighting the soundman’s desk and there’s nothing on the walls, (This was a clear omen of what was to come…) The stage appears to be a small alcove next to the stairs in a corner of the room. It is lit by two dusty-looking LED par cans hung from the ceiling just in front of the stage.

So this is where I need to come clean… I don’t shoot with flash. This is because I don’t want to blind the band or ruin the ambiance for all those splendid music lovers who’ve spent their hard-earned to come and see their favourite band. To be fair, I shoot with some pretty awesome kit, but:

1) When you point two bright pink par cans at a stage you get very pink performers. The camera’s sensor seems to see even more PINK than the naked eye. The uniform frequency of light flattens the features, and even if a shot is bang on in focus you still loose detail and depth.

2) It’s usually good to point the stage lights at where the band are likely to be… It turns out that the speaker and plug sockets on one side of the stage were curiously well lit and Kevin, the guitarist from Love Buzzard managed to find the perfect spot on the stage where his guitar was eye-searingly well lit and yet his face was in complete darkness.

3) I’m still learning my trade, that means that I have to apologise to Love Buzzard, my shots of your set are (unsurprisingly) mostly PINK! It was only towards the end of the Buzzard’s set that I found the magic button that solved (almost) everything.

What was the magic button you may ask? Well, there’s no pre-programmed white balance setting that can stand up to the Old Blue Last’s pink par cans, however by taking a custom colour temperature measurement off the skin of the kick drum, and using that to set the white balance, the pink was banished! I’m pretty certain this only worked for me because the lights stayed pink all night – if there’s been some clever chases programmed I’d have been in all sorts of trouble. Still, a big lesson learned! 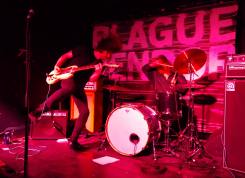 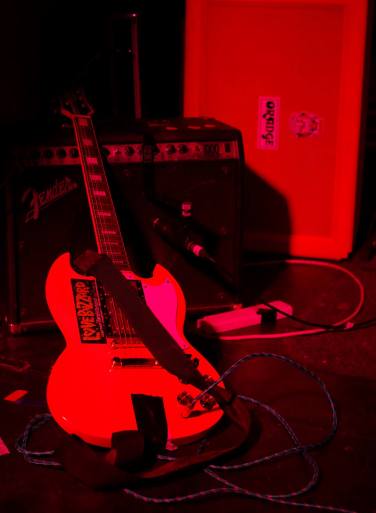 Wedged against the wall next to the stage with a slightly unwell Lampy and another courageous photographer, with the rest of the venue full, and buzzing, we had a ring-side seat for the evening’s entertainment. Love Buzzard’s set was everything you’d expect from Kevin and Al. Straight from the get go they hit it hard. Only once did I see shards of drum stick spray in to the crowd (no obvious casualties), but Lampy reckons at least one more drum stick may have passed us by en route to embedding itself in a (potentially) innocent bystander. The Buzzard’s performance was so frenzied it seemed barely under control but the rhythm of Al’s drumming and melody behind Kevin’s crazed guitar playing never once crumbled. You could feel their energy being soaked up by the crowd and they became increasingly restless as the adrenaline built.

Plague Vendor took to the stage and wasted no time unleashing their brand of vibrant, blues-infused, voodoo-punk on a crowd that lapped up every syllable of Brandon Blane’s screamed vocals. This was a very special, and electrifying performance from an incredibly talented and tight band determined to give the crowd a real night to remember. Brandon Blane’s stage presence is electrifying and has a rare talent of somehow being able to catch your eye and convince you he’s singing this track just for you – he moves around the stage in weird jerky, hip thrusting movements, continually playing with his vocals rolling sounds you swear should have come out of a box of electronic trickery not a human throat in amongst observant and at times darkly provocative lyrics. It’s a performance that bewitches the crowd. There’s an unpredictable edge to the stage show with Brandon swinging from the lighting truss and doing a handstand on the drum kit mid-song. I’ll admit that when Brandon asked for the lights to be further dimmed, as a photographer, I could have cursed, but the effect on the mood of the venue was perfectly managed and blended with the music perfectly further accentuating the the more darkly insidious sensual edge to Brandon’s performance.

This was also the last night of the tour and with their set done, the Buzzard were now off duty and free to truly let rip. It’s hard to tell, but I think they were the final catalyst that caused the Mosh to erupt… 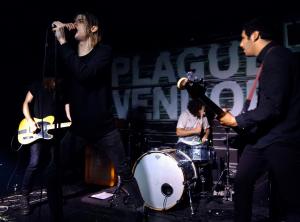 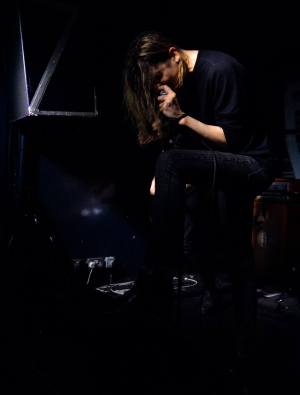 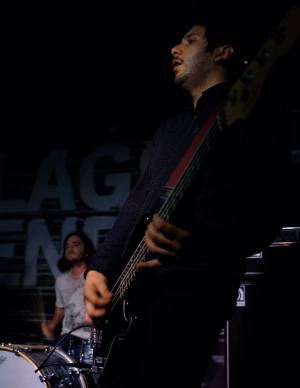 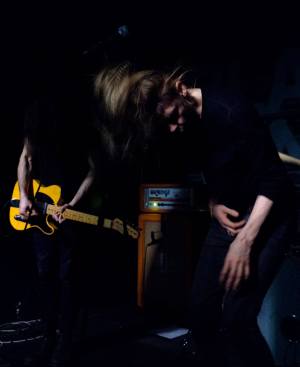 Must be a tad hungry… 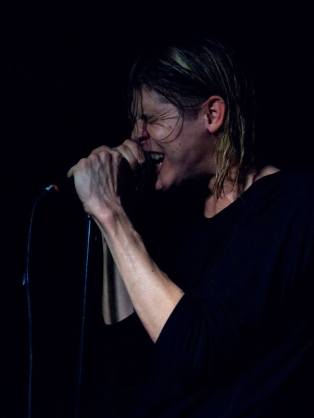 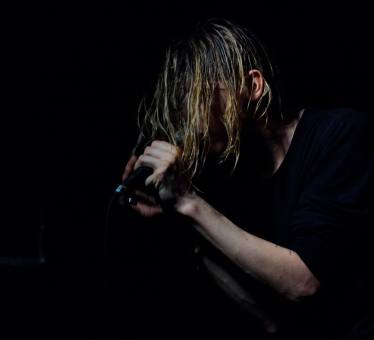 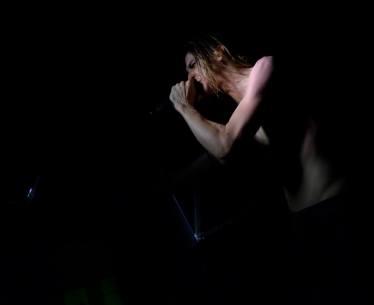 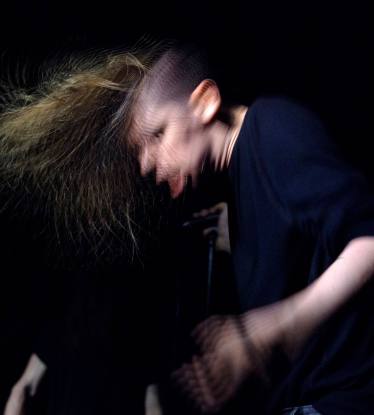 All got a bit much for my camera… a fun shot though!