It has to be said that I was suffering from a few mixed emotions as I bimbled through the backstreets of Brixton on my way to the Windmill on a particularly sunny Saturday afternoon last weekend. A little trepidation as I’d never shot at the Windmill and I expected it to be really tough from a lighting perspective. A lot of excitement as I was expecting to be on the receiving end of some fine noise (and there was reported to be BBQ, and being a tad hungry this mattered greatly). And a little sadness as I knew this was to be Love Buzzard’s last show…

After briefly catching up with Al Brown from the Buzzard, grabbing a feed and a soothing beverage I rooted in my bag for the ear plugs and sidled towards the stage to scope out the set-up and enjoy a suitably blistering set from the Plainviews. The atmosphere in the Windmill is always electric, this is where people who love their music come to celebrate that love. The venue oozes character. It’s dark and hot, very loud and increasingly sticky as the night progresses. The stage is wedged in the corner of the room at the end of the bar with two large speaker stacks flanking the narrow stage front. The sound-man’s desk is squeezed in the unfeasibly small space between the end of the bar and the stage. A pair of disused pumps on the bar form a convenient place to store thick coils of spare cables. Given the slightly odd shape of the venue sound is pretty damn good. Like many small venues sound is rightly the focus and lighting comes second. There’s no-one to focus the lights and the bands are lit by an array of ceiling mounted par cans in strong block colours of blue and red and the drummer sits in darkness in the back corner. The great thing for me is that large swaths of white cloth line the back walls, and the the lights don’t change colour that often.

I’m really here to shoot the Love Buzzard’s last show. Given the energy of Kev, the guitarist and singer for the Buzzard’s, I need to get a feel for the stage and lighting (ie: monkey about with the custom white balance function so not every photo is RED) before their set so I line up on the lefthand side on the stage for the Cassels. Brothers Jim and Loz Beck hail from Chipping Norton and played a really exciting set blending heavy yet melodic punk-rock riffs and sudden shifts in tempo with intelligent, observational lyrics weighed down with disillusionment, frustration and a healthy dose of social comment. It’s a potent cocktail making for a very enjoyable set. Of course, I should have chosen the other side of the stage to get some clear face shots of singer and guitarist Jim and I had no shot to Loz on drums, but it has to be said I really enjoyed this set…

At the end of the set the crowd dispersed outside for actual air and to the bar for refreshment as Love Buzzard got set up and I took my chance to shift position over to the other side of the stage – some times it is good to copy the positioning of the other photographers… It is a great pity that with Kev moving the flight of the Buzzard has come to an end. I haven’t seen anything approaching the pure energy, irreverent mayhem and at times, destruction Kev and Al bring to the stage before and it’s a wholly intoxicating combination. My introduction to the Buzzard was their set at Rough Trade East with Virgin Kids back in March where I was hooked by Kev’s repeated expulsion of the microphone stand from the stage and Al’s frenetic and powerful drumming that’s been the death of more than a few drum kits. Love Buzzard have also been my route in to the world of Fluffer Record’s Pit Parties and a much more direct connection with London’s explosive and ever-evolving DIY punk and garage rock scene.

Saturday’s set did not disappoint, only this time around rather than the drum kit disintegrating under Al’s pummelling, it was Kev who managed to destroy his guitar during the last song of the set resulting in some incredibly “Disney” noises before Kev and Al gave up on the last track. As ever, getting a clean shot of Kev is almost impossible – he moves far too quickly! I’ve found that I just have to focus on the microphone and embrace the motion in the shot.

The last band I shot at Sunburn were USA Nails. This band played an incredible set, they play/sing/snarl it like they really mean it! It’s intense, it’s loud, they are clearly having a lot of fun when they cut loose and it’s infectious. I’m not sure if there’s such a thing as hardcore kraut punk, but perhaps USA Nails are it and maybe more, and something completely different too. Their sound is fresh, it doesn’t obey any rules that allow easy classification and that’s part of the joy that confounds and connects with the crowd. These four musicians all have other projects, but this is the one driven by what feels right to the artists.

There was a strong colour differential across the stage making for some exciting shots where some of the band were bathed in solid red whilst others were lit with a cool blue with electric pink side lighting. There’s no white balance trickery I know of that’ll sort that out in the camera or during post-processing, but by aiming for sharp focussing and narrow depth of field it’s still possible to get some really interesting and brightly coloured contrasting shots. I have to admit my favourite moment was when the guitarist threw himself in to the crowd and I managed to get a shot of him apparently floating in darkness on the shoulders of the crowd beyond the reach of the stage lights… I’ll be keeping an eye out for this lot.

And in case you wondered, the Burgers were really rather good… 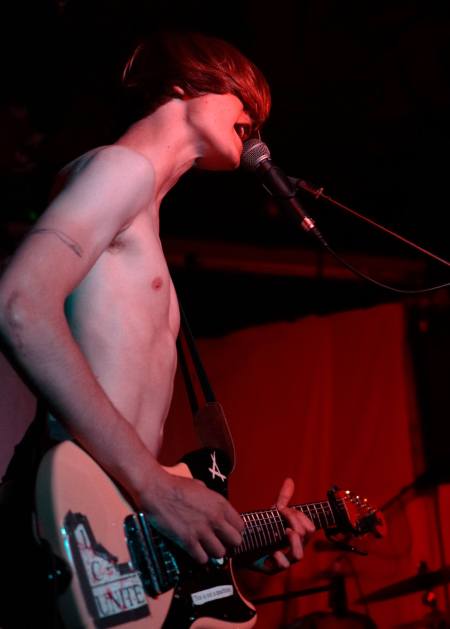 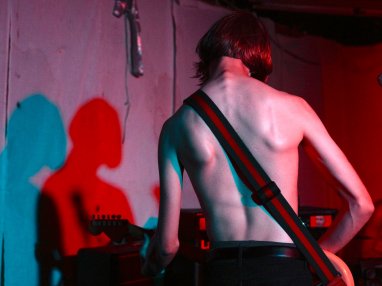 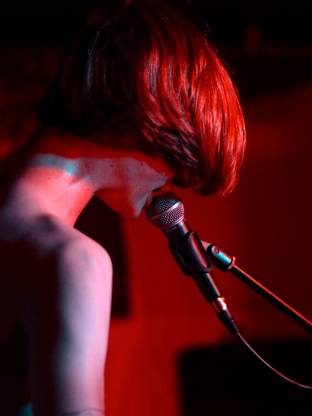 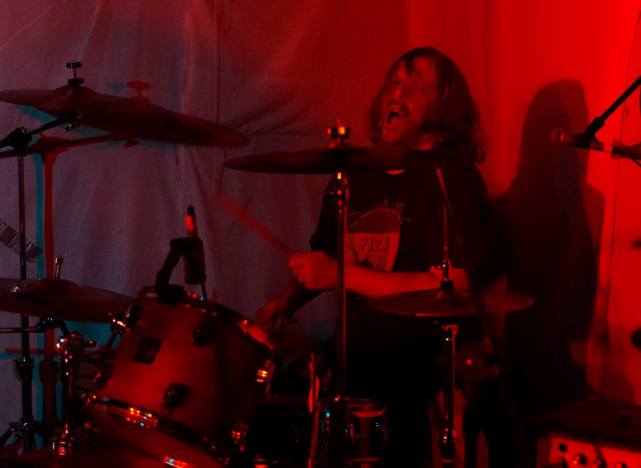 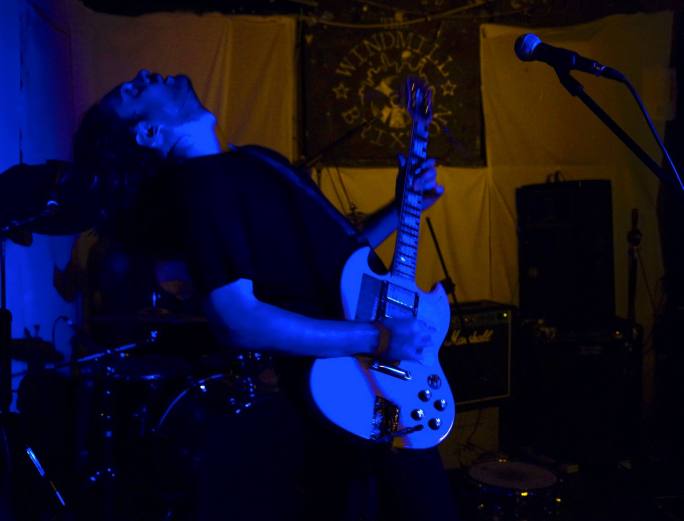 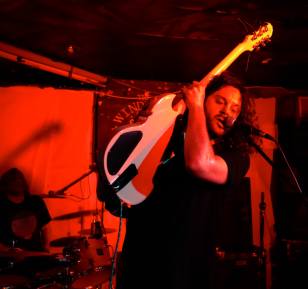 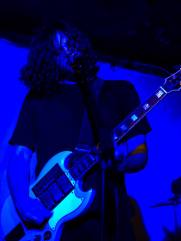 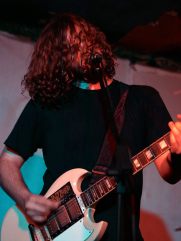 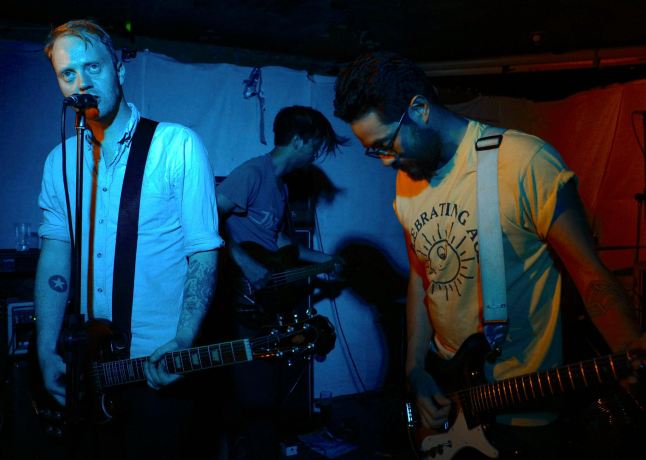 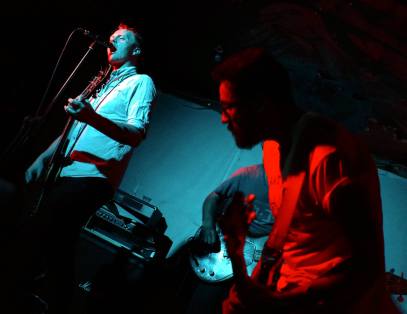 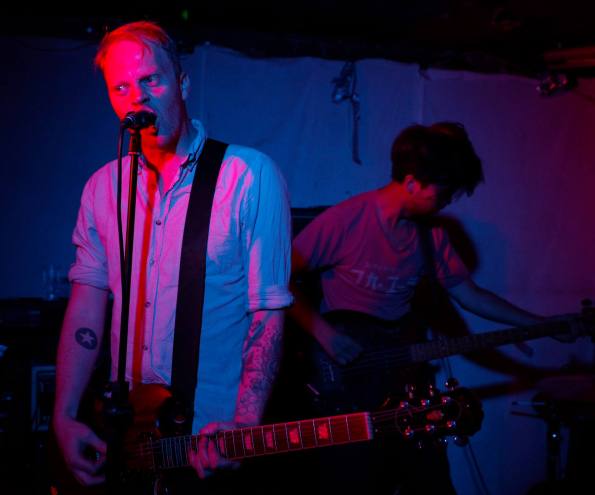